What was the customer’s problem / question?

That HeatFun is suitable for almost any space proves the project that we have been able to do together with Royal FloraHolland flower auction. Royal FloraHolland, with locations in Aalsmeer, Naaldwijk Rijnsburg and Eelde, has the vision to make the world, together with growers and their customers, more beautiful and healthier with flowers and plants. The problem that the auction had at the location in Eelde was that the auctioneer’s workstations were experienced as cold and cold. This was due to the continuous opening of the auction room doors to move the flowers and plants inside and out. In addition, it was also not intended that the workplaces were continuously heated and illuminated, but only at the times of use. 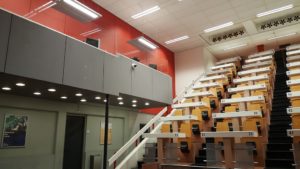 What is the delivered solution of HeatFun?

The solution provided is our HeatFun Comfort Panels. Each workplace has a ceiling element with infrared heating and LED lighting. This optimizes the workstations when heated to the user’s liking.
Website: www.royalfloraholland.com